Amazon Web Services known also as AWS has been the leading driver for the company’s overall growth in the last quarters, but this time around in Q2, segment revenue growth slowed sequentially and bears began to speculate if this spectacular run is coming to an end. But that doesn’t seem to be the case.

The cloud infrastructure and platform services industries are fiercely competitive, and companies are always on the lookout to roll out new offerings and services as soon as new pockets of growth emerge.

But despite this fierce competition, Amazon’s AWS has managed to grow revenue steadily over the last 33 quarters (over 8 years). Something that is a commendable feat and an enviable position within the sector. 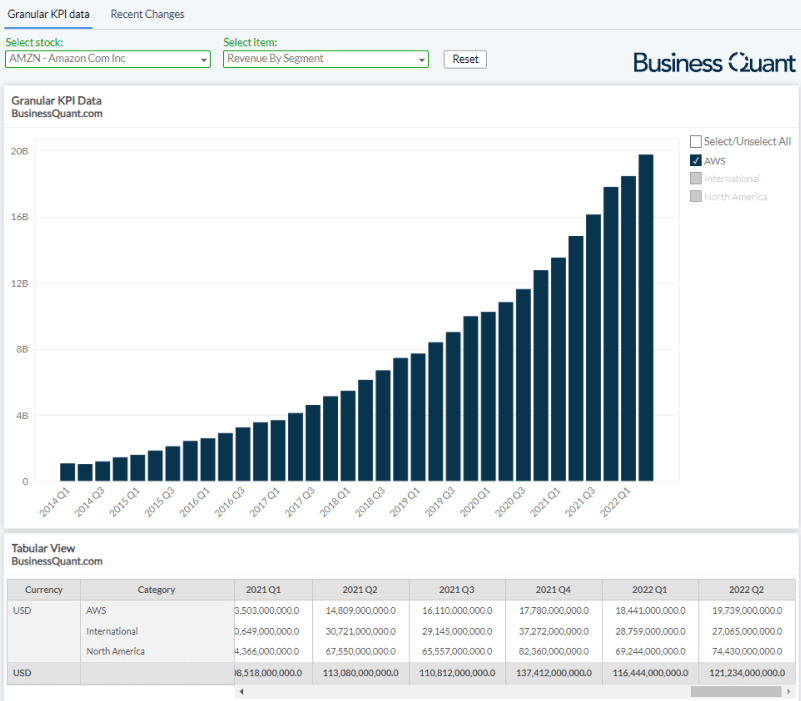 Now, the pace of Amazon AWS revenue growth slowed down over the years, but that’s only natural as the business has multiplied and is therefore starting to consolidate.

But what worries investors more is the fact that the growth rate of AWS has decreased by 56% in the last 4 quarters alone. Investors are now wondering if this is the start of a prolonged slowdown and, if so, how much further their growth rates may fall. While that’s a valid concern, there are two reasons investors shouldn’t worry just yet.

For starters, the chart below highlights that Amazon AWS growth pace remains higher than its 2019 and 2020 levels. This means that the segment’s performance remains very good on a standalone basis. 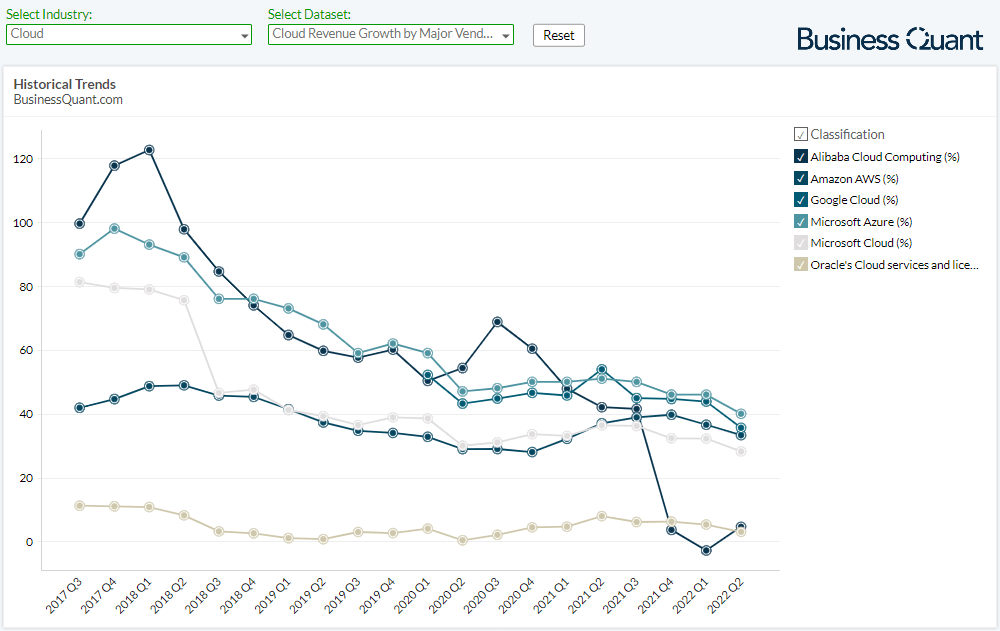 By comparison, Amazon AWS revenue growth rate has slowed to 56%, meaning its performance has remained relatively strong over the period.

Moderating growth across the industry suggests there have been spending cuts in cloud services of late due to difficult macroeconomic conditions.

But the fact that Amazon’s AWS has been less affected in its control group suggests that its services are considered relatively more essential among businesses and therefore more valuable. However, the same cannot be said for Microsoft Azure (MSFT.US), Alibaba Cloud (BABA.US) and Google Cloud (GOOGL.US), as their growth slowdown has been much more intense.

A small step back for the uninitiated: Amazon’s AWS is dominating the cloud infrastructure and platform industry globally. While others are catching up, there is still a long way to go before they begin to compete with Amazon’s formidable position in the space.

Also, for the record, AWS accounted for nearly 16% of Amazon’s total revenue last quarter. This means that the segment has a considerable contribution to the company’s top line and any fluctuations there will affect Amazon’s finances, considering that Amazon’s core business is its online marketplace. 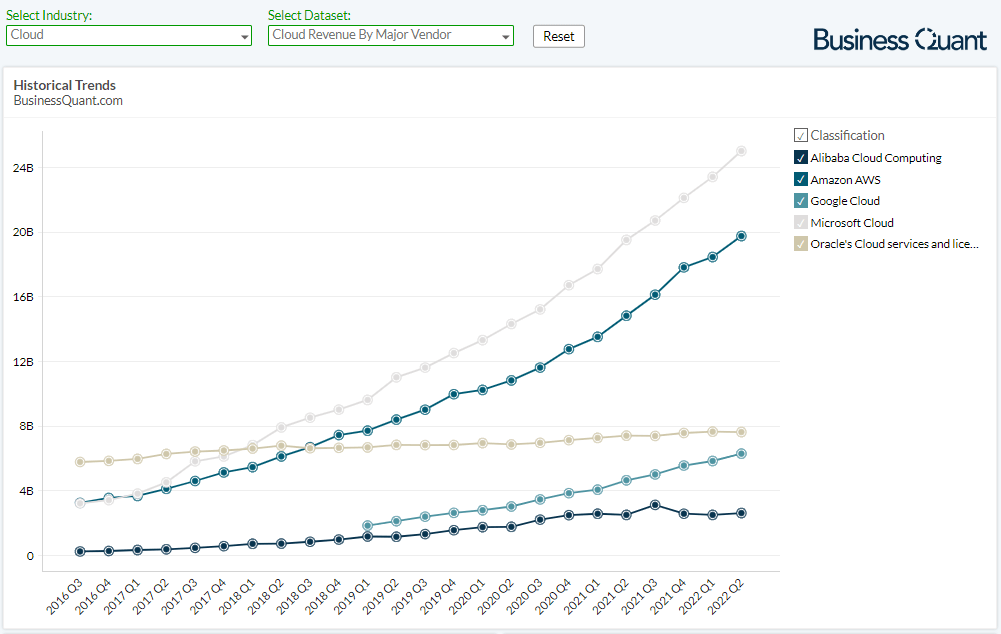 So we have established that Amazon AWS results were strong in the second quarter. But the question that arises now is: what future awaits the segment?

What can we expect?

To begin with, Amazon management is optimistic about the growth of AWS and increasing expenses for it. While they didn’t disclose exact numbers or issue specific guidance for the segment, they did note at their Q2 earnings call that capital investments for AWS are increasing.

CITESTE SI:  Ambani’s Reliance is back on the acquisition hunt

Increased capacity, new offerings, and geographic expansion suggest that Amazon’s AWS is likely to continue to grow at its fast pace for the foreseeable future as well.

AWS continues to grow at a rapid pace, and growth rates indicate that we are still in the early stages of enterprise and public sector adoption of the cloud. For the full year 2022, an increase in capital investment is expected than last year.

Amazon itself, in the earnings release, expects technology infrastructure spending to grow year-on-year, primarily to support the rapid growth in innovation seen with AWS.

Second, Amazon’s AWS remains in a favorable position. Other prominent cloud providers such as Microsoft Azure, Google Cloud, Oracle (ORCL) have been operating in the space for over 5 years but do not even come close to AWS in terms of value proposition.

This, once Furthermore, it suggests that Amazon AWS user adoption will continue to increase and its revenue growth momentum will remain high in the coming quarters, at least until the competitive landscape changes substantially.

The positioning of this market can be seen in the following Gartner quadrant (provides competitive positioning in a graph of four types of technology providers, in markets where growth is high and provider differentiation is different: Leaders execute well against their current vision and are well positioned for tomorrow): 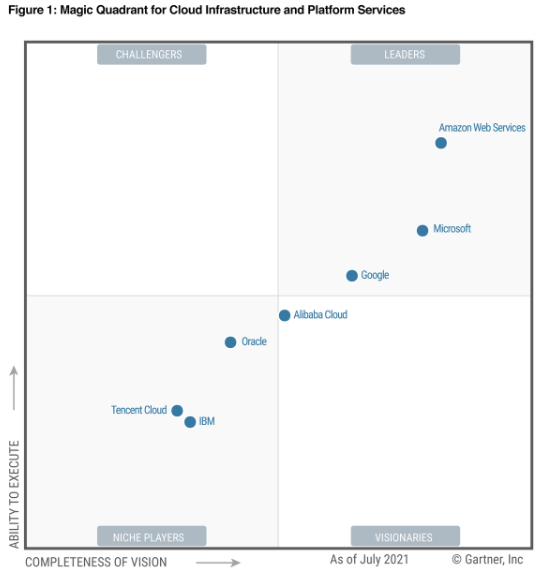 Lastly, a survey conducted by Flexera revealed that 76% of respondents used Amazon’s AWS. This is a gigantic proportion of users who rely on Amazon for their cloud infrastructure needs.

It’s a clear indication that rival cloud platforms simply can’t dent Amazon AWS’s growth momentum or drive users away from its ecosystem. Therefore, the e-commerce giant’s foray into vertical cloud integration will continue to grow rapidly in the coming years as well. 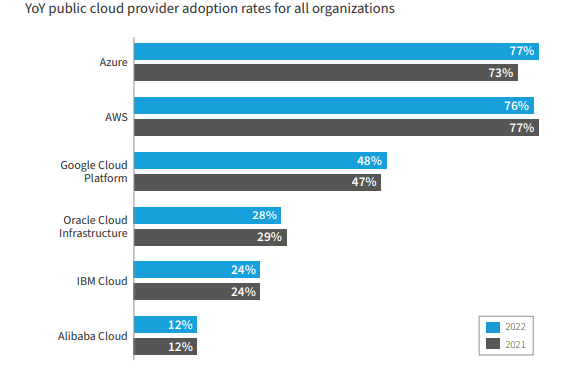 Amazon during the end of the second quarter has consolidated support levels at $100 per share, which coincides with the historical resistance zone during the 2018-2020 period, the level and date from which the technology company began one of its most to its all-time high above $188 per share.

The third quarter begins the change in trend, surpassing previous relative highs and consolidating a new bullish guideline, marked by its rising lows. The next control zone is at $135-140, key support during the first quarter.

Although other cloud providers are suffering from a drop in sales, Amazon’s AWS continues to thrive. Not a matter of luck or chance, but rather due to aggressive CAPEX planning, relentless execution, hardware upgrades, increased capacity, and smart integrations with new and upcoming cloud infrastructure software .

Therefore, the market consensus is likely to expect Amazon’s AWS to continue to grow at its fast pace and drive the company’s overall growth for the foreseeable future.

As far as valuations go, Amazon shares are trading at just 2.7x to sales over the last twelve months. This is quite low compared to some of the other fast growing cloud providers and makes Amazon an attractive purchase at current levels.

Such as Microsoft (10.06x) or Google’s Azure (5.7x). Investors with a multi-year time horizon might therefore want to stockpile shares of the e-commerce giant in the face of possible price corrections if they don’t already have them in their investment portfolio.

Based on an analysis from Darío García, EFA XTB Spain