What to expect from the Fed today?

Over the past weeks, the number one topic among investors has undoubtedly been central banks, which are even more determined to tighten monetary policy. Investors have been discounting the ECB’s hawkish turn and Christine Lagarde’s firm comments.

Now it’s time for the Fed. The FOMC will make its decision on rates at 7pm BST today, and the decisions and comments from this event will project market sentiment over the next few weeks. Let’s look at the key points to better prepare for the event.

A hike at today’s meeting is more than certain. The market is currently discounting a 75 basis point hike at today’s FOMC meeting. However, swaps indicate an almost 18% chance of a 100 basis point hike. What does this mean? The market is set on a decisive Fed action, with a minimal chance of a more hawkish turn. Nevertheless, analysts surveyed by Bloomberg almost unanimously point to a 75-point hike. 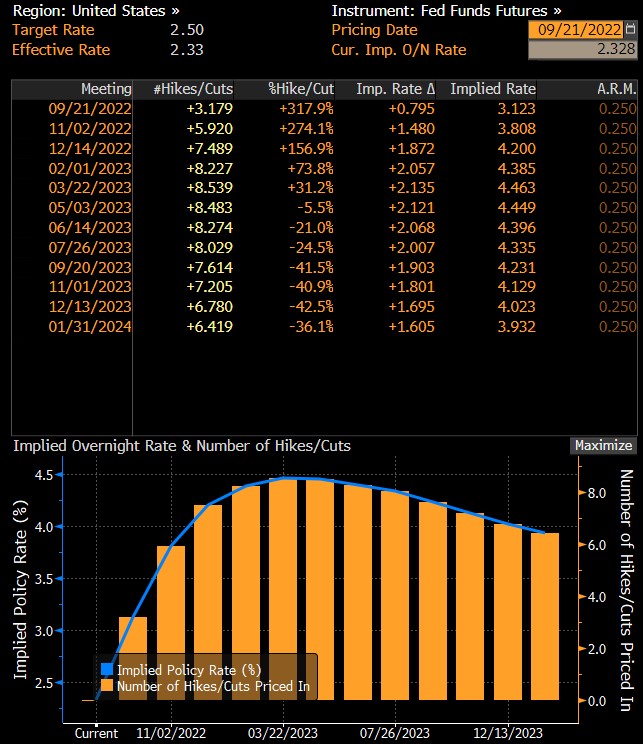 Current valuation of the future path of interest rates in the US. Source: Bloomberg

The market seems convinced that a 75-bp hike is already fully priced in, so investors’ attention will mainly focus on Powell’s conference at 7:30 pm BST Inflation is a big and major concern for the U.S. economy, so Powell will have to do his best to balance hawkish rhetoric with a dovish narrative related to the economy.

Keep in mind, however, that inflation expectations in the U.S. show the first signs of a slowdown in the economy, so today’s hike may impose an upper limit when it comes to the amount of hikes in the current cycle (unless the macroeconomic situation deteriorates further and core inflation surprises). 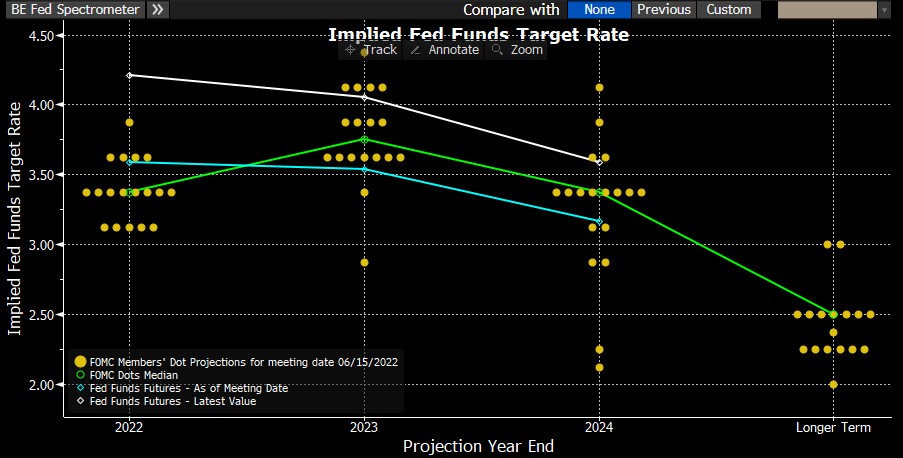 Also worth mentioning is the dot-plot, which represents each Fed member’s prediction of the path of interest rates. At the June meeting, the median expectation showed that rates peaked in 2023, reaching 3.75%.

The new dot-plot is expected to show an upward revision, with the terminal rate expected to reach 4.5%. Investors will also be interested in the median after 2023, which may provide more information regarding the Fed’s long-term plans. The scenarios are two: „we raise rates and lower them quickly” or „we raise rates and leave them high for an extended period.”

How will the market react?

Statistically, September is the worst month for global asset valuations. Looking at the way the S&P500 index traded 10 days before the rate decision and 10 days after the decision, we note that the index seems to confirm the unwritten saying among investors: „buy the rumors, sell the news.”

A look at the markets before the decision

At the beginning of today’s session, the dollar dominates the currency market. The EURUSD pair is losing dynamically today and testing support at the level of 0.9900. Investors should pay close attention to Powell’s comments after the committee’s decision, which may indicate the direction of the Fed’s future policy.

The benchmark US500 (S&P500) is under pressure today, but managed to erase most of the early losses caused by President Putin’s announcement of partial mobilization in Russia.

Despite the negative sentiment, buyers have managed to defend major support near 3855 pts, and as long as the stock remains above this level, another upward impulse toward key resistance at 3900 pts could be triggered.

However, increased volatility is expected in the evening. If the Federal Reserve remains aggressive in its fight against inflation, the recent downward movement could deepen.

The nearest support is at the level of 3800 points, where the lower limit of the 1:1 structure and the 38.2% Fibonacci retracement of the upward wave initiated in March 2020 runs.