Software companies dominate the Deloitte 2019 Central Europe Technology Fast 50 ranking, with 31 entries in this year’s competition from eight countries. The media and entertainment field is the second best represented in the ranking, with ten companies, while the hardware and the fintech sectors bring nine entrants together. This year, Lithuanian software company Voltas IT leads the charge in the main ranking with 5,734% growth in revenues between 2015 and 2018.

This edition of the Technology Fast 50 programme brings high and valuable understanding about the evolution of the Central European tech ecosystem and hints about the market in the years to come. The powerful representation of software businesses in the ranking mainly originates from traditionally well-anchored countries in the technology field – The Czech Republic, Hungary, Poland.

This year, smaller countries in the region like Estonia, Bosnia and Herzegovina or Slovakia, suggests that new technology powerhouses may be on the rise in the Central European area.

“This year, it has been particularly pleasing to see that almost threequarters of the companies in the ranking are in it for the first time, once again emphasising the enormous speed at which the businesses with the best ideas and most powerful breakthrough solutions can evolve”, said Agnieszka Zielińska, Partner, Financial Advisory Services, Fast 50 Programme Leader Deloitte Central Europe.

Companies must meet a number of criteria to be considered eligible for the main CE Fast 50 ranking:
• Have base-year operating revenues of at least €50,000 in 2015, 2016, 2017 and a current year operating revenue (2018) of at least €100,000.
• Own proprietary intellectual property or proprietary technology, sold to customers in products that contribute to a majority of the company’s operating revenues.
• Have an ownership structure that excludes majority-owned subsidiaries of strategic entities.
• Headquarters in a Central European country (Albania, Bulgaria, Bosnia & Herzegovina, Croatia, the Czech Republic, Estonia, Hungary, Kosovo, Latvia, Lithuania, Macedonia, Moldova, Montenegro, Poland, Romania, Serbia, Slovakia or Slovenia).
Winners are then selected by ranking their revenue growth over the four years from 2015 to 2018. 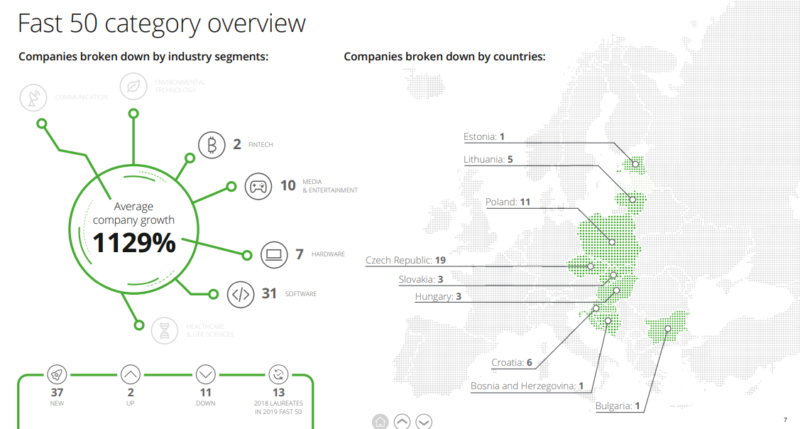 “Every year, I ask myself what it must take to be one of the exceptional businesses ranked in the Deloitte Technology Fast 50 for Central Europe. Energy and commitment, certainly. Great leadership, with the ability to inspire others. Vision. Technical understanding. An eye for a market opportunity. Entrepreneurial flair and a talent for sales. And a capacity for team building, with a positive culture and ambition to succeed.

If those qualities are what every entrant has, what about those companies that head the ranking and win the awards? Companies like Lithuania’s Voltas IT, the ‘fastest’ of the Fast 50 with its professional-standard automotive diagnostics solutions that every driver can use. Or FF Trader, the Czech Fintech business that wins this year’s Rising Stars category thanks to its unique educational platform for financial traders“, concluded Gavin Flook Partner, Clients & Industries Leader Deloitte Central Europe.

The full report can be downloaded here.