Oil prices saw a gargantuan price jump when markets reopened after the weekend following the attacks on Saudi Arabia’s largest oil facility. The Iranian-backed Houthis group in Yemen claimed responsibility for the attacks.

What has happened so far for the global crude market? So, the noticeable price increase seems to be well supported by fundamental factors as the attacks have caused a temporary loss of 5.7 mbpd (thousand barrels per day) – the equivalent of more than half of Saudi Arabia’s oil output or 5% of global crude supply, according to X-Trade Brokers.

„It is going to be the largest disruption in history, as evidenced by the chart below. Over the weekend, Saudi Aramco’s CEO informed that the company would have more information within 48 hours, hence it means that some reports could come in today. It is worth noting that Saudi Aramco’s crude exports were over 7 mbpd last year, 75% of which came to Asian customers.”

Saudi Arabia has roughly 188 million barrels in reserve, meaning that it is capable of replenishing its lost capacity by roughly 37 days (it has already informed that it will keep its exports unchanged by using its inventories).

On the other hand, the US stands ready to release as much oil as needed from its strategic petroleum reserve. Let us remind that the country holds crude reserve exceeding 640 million barrels, the equivalent of roughly 52 days of US production.

Finally, from unofficials information Saudi Arabia could be able to restore up to 50% of its lost capacity within a week, a move which would ease pressure on crude prices. 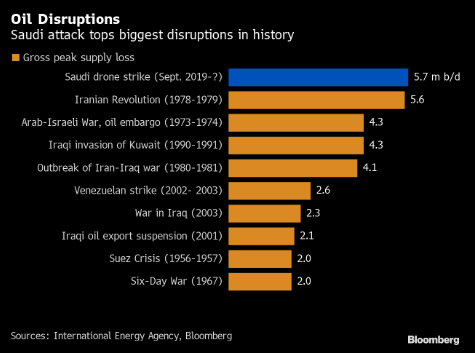 The weekend’s attacks on Saudi Arabia’s biggest oil facility are going to have the largest disruptions in history to global crude supply. Source: Bloomberg

According to CNBC, the international benchmark Brent crude oil price spiked as much as 19% on Monday to $71.95 a barrel, while U.S. West Texas Intermediate jumped more than 15% to a session high of $63.34 a barrel.